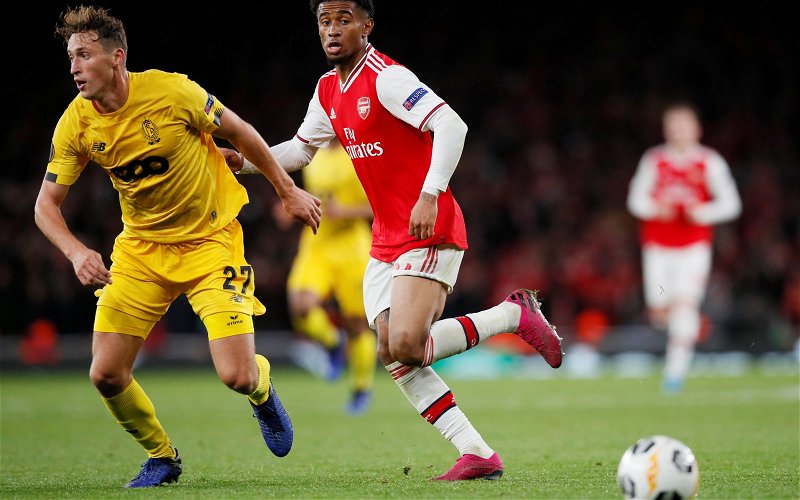 Speaking on the latest video on his YouTube channel, Charles Watts has stated how he believes Arsenal academy graduate Reiss Nelson will depart the club in the summer.

The 21-year-old winger has only featured twice for Mikel Arteta’s men this season in the Premier League, failing to make a single appearance for the first-team squad since their FA Cup tie against Newcastle United at the beginning of January.

Nelson enjoyed a successful loan spell with Bundesliga outfit Hoffenheim back in 2018/19, where he scored seven goals and provided one assists in 29 outings for the German side.

However, since returning to the Emirates Stadium, the England Under-21 international has found opportunities hard to come by, and Watts believes his time is up in North London.

He said: “I think Reiss will be off in the summer. I think he’s had a really wasted season, to be honest, certainly, a wasted second half of the season. He should have gone out on loan, that wasn’t Arsenal’s fault really, there were opportunities for him to go out on loan, but he decided to stay.

“I’m not sure why really because now he’s just playing Under-23s football which makes little sense to me for a player of that quality. So yeah, I think he will go, I think he’ll be gone and will be one of the few players that Arsenal cash in on in the summer.”

It wasn’t too long ago that Nelson was being likened to Borussia Dortmund’s Jadon Sancho after following in his childhood friend’s footsteps and making the brave decision to test himself in the German top-flight.

After impressing with Hoffenheim many expecting the pacey forward to establish himself in the Gunners first-team set up but it just hasn’t happened for the youngster at his boyhood club.

A move away from Arsenal to a side that can guarantee him the game time that he needs to continue developing will undoubtedly be beneficial for Nelson’s career.