Tottenham Hotspur fans on Twitter have been responding to the latest social media post from Lilywhites journalist Alasdair Gold.

This comes after the journalist shared a post on his official Twitter page with an article from football.london on Spurs defender Davinson Sanchez that contained recent comments made by the Colombian about the problems at Tottenham and also what the players learn from Harry Kane.

So, what did these Spurs fans have to say in regards to Gold’s post on Sanchez?

“He has to learn how to stay focused”

“He himself is one of the biggest problems at Spurs”

“Hope he gets his confidence back one day. Is the shadow of the player he was once developing into”

“Sanchez’s problem is clearly he’s not listening and learning and following in the footsteps of the great Ledley King…Has Sanchez improved in 3 yrs?No he clearly hasn’t!!Needs upgrading this summer”

“I suspect he is the right person for learning Spurs’ secrets, as he is quite good at ‘giving the game away’! Up next is Dier and Aurier!”

“It would be great if he could say what he really feels.”

Looking at the replies to this post from Gold, it appears that the majority of these Spurs are quite quick to point the finger at Sanchez and criticise his performances for the north London club so far this season.

Do you think Sanchez has improved since he arrived at Spurs? 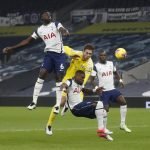 Given how the 24-year-old has only managed to earn himself a fairly disappointing season rating of 6.53/10 for his performances in the Premier League so far this season, which places him as the 15th worst performer and second worst defensive performer, it’s understandable why these Spurs fans have been critical of the defender.