Graham appeared as a guest on the latest episode of the Celtic State of Mind podcast and the panel discussed multiple issues involving the Bhoys following their 1-0 loss to Ross County in the Scottish Premiership. Graham talked about Kenny’s performance in the game and he believes that the team could do better while playing Anthony Ralston at right-back instead of playing the Everton loanee.

The Hoops managed to sell Jeremie Frimpong to Bayer Leverkusen on a permanent basis in the January transfer window. This left them light in the right-back department but the Hoops ended up signing Kenny on a loan deal, with Ralston being the other option in the position.

Is Ralston better than Kenny? 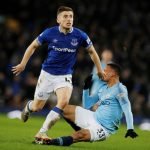 Graham believes that Kenny offered nothing on the right against Ross County and it seems as if Celtic have just thrown the money at someone who’s not even better than Ralston.

He said (5:08) “Jonjoe Kenny offered absolutely nothing on the right hand side. We’ll be better with Ralston out there with what I’ve seen of Kenny now. We’ve seem to have just thrown money at this loan deal for a player who’s not any better than Ralston at this precise moment in time.”

The 23-year-old Kenny has now made six Premiership appearances for the Bhoys this season, having picked up one assist too. The right-back has picked up a rating of 7.04 during this time, while being a regular part of the side (as per Whoscored).

This shows that he’s certainly had a good time at Parkhead, even though he didn’t pick up a great rating against Ross County. Only ten Celtic players have picked up better ratings than Kenny, so perhaps a bit of criticism for him is unjustified.