Celtic fans have been reacting to some team news ahead of their upcoming game with St. Mirren.

With the title race pretty much over, even at this early stage there is still a lot for Neil Lennon’s men to fight for. European qualification being the most important one, but also a sense of pride after a season in which things have been terrible both on and off the pitch.

But for tomorrow’s game at The SMISA Stadium, they might have to do it without one important player as head coach Lennon announced in his press conference ahead of the game (via @AlisonGConroy) that central defender Shane Duffy is suffering from ‘a bug’, although the Irish defender should be available. She also stated that Soro should be okay for tomorrow and that James Forrest has returned to training.

Here’s what these Celtic fans had to say on the news:

“Don’t need updates on Duffy unless reporting his loan deal has been cut short.”

@martin_mcvay
“Shane Duffy is in a car crash every week”
@mostlyceltic81
“Shane, should just take another few days rest. No point in the big fella rushing back”
@HandPeters
“Shane should maybe take a few more weeks off, just to make sure he has fully recovered…..please pass this onto him”
@paulskelton181
“Terrible news. Not good about Soro’s crash as well.”
@LeighsLeftPeg
“You had one job Mr Bug”
@TamsellicsonIII
“Soro was in a car crash while Duffy is a car crash.”
@FlwerScotland 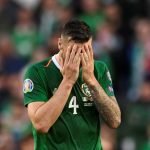 The animosity towards Duffy in particular comes across as a bit strange when you consider he’s been their fourth-best player this season statistically on WhoScored, even leading them in aerial duels and blocks over the course of the campaign.