Fans of Celtic have been reacting to a post on Twitter, which relayed the Hoops’ team news ahead of their Scottish Premiership clash on Saturday.

Following the resignation of Neil Lennon as the Bhoys manager earlier this week, Celtic’s first test under interim manager John Kennedy is the visit of fourth-placed Aberdeen this Saturday.

However, after the official Celtic Twitter account relayed Kennedy’s squad ahead of the fixture against the Dons, fans of the club flocked to have their say on the matter, with many appearing to be furious at a number of the 37-year-old’s selections for the clash.

Are you pleased with Celtic's starting XI? 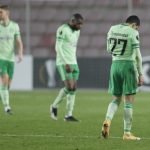 So, what exactly did these Celtic fans have to say in reaction to the club’s team news for the Aberdeen game?

“Meet the new boss, same as the old boss.”

“Well, isn’t that all massively underwhelming?”

“Unbelievable. Brown still getting picked at 35. It’s clear now Kennedy was part of the problem.”

“Oh, has Lennon not left yet? I thought he was away already!”

“Bain again is the pain.”

“How Christie is anywhere near the team is beyond a joke shouldn’t even be on the bench after Ross County.”

All in all, it would appear that these Celtic fans are far from happy with Kennedy’s debut team selection in charge of the Hoops, with some lambasting the 37-year-old’s decision to start Ryan Christie, while others took aim at Scott Bain’s inclusion in the starting XI.