Many Celtic fans have been discussing some comments from Brendan Rodgers that recently emerged on social media.

Rodgers was recently talking about Lennon’s resignation at Parkhead. The former Hoops boss said that he is saddened whenever a manager loses his job but he is sad in particular for Lennon because he calls him his ‘friend’. Rodgers also said that when the dust of the resignation settles down, Lennon will go down as a legend of the club.

Do you care what Rodgers says? 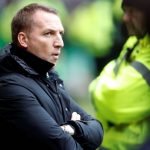 He also talked about John Kennedy, saying that he understands the demands of Celtic and he knows the club well. Rodgers believes that Kennedy is a good pair of hands to stabilise the Bhoys.

These comments from the former Hoops manager were relayed on Facebook by Glasgow Celtic Champions. Many Celtic fans made their views clear about Rodgers.

What did Celtic fans make of Rodgers’ comments?

Rodgers had managed Celtic for a little less than three years. He had joined in the summer of 2016 and had departed for Leicester City in the February of 2019 (as per Transfermarkt).

As the Hoops boss, Rodgers won the Premiership twice, helping the club to a couple of Scottish Cup titles and helping them win three League Cup crowns (as per Transfermarkt).

A lot of these Celtic fans are still angry at Rodgers for having departed their club mid-season and some of them barely care what Rodgers says.

Having said that, the Hoops don’t seem to close to winning their tenth title in a row this season as they’re 18 points behind Rangers. Protests were held against the manager and the board. Also, the club decided to travel to Dubai for a mid-season camp and had faced criticism for it.

Rodgers’ Leicester meanwhile are well inside the Premier League’s top four – tied on points with Manchester United. It shows that Rodgers has done quite a good job at Leicester and considering the situation at Celtic, one can’t blame him for leaving the Hoops.