Celtic legend Simon Donnelly has recently discussed whether Celtic should move for Ryan Gauld or not.

Donnelly was a guest on the latest episode of the Celtic Huddle podcast and the panel talked about multiple issues involving the Hoops. They also talked about multiple players that the Bhoys could sign in the summer and this led to host Mark Wilson asking Donnelly about Gauld and his suitability to Celtic.

Gauld is currently at Portuguese side Farense – the club that he joined from Sporting Lisbon in 2019. He is a product of the Dundee United youth academy and he has previously spent a loan stint at Hibernian too (as per Transfermarkt).

Should Celtic move for Ryan Gauld? 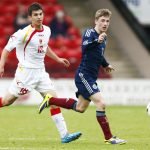 Donnelly has been an assistant manager at Dundee United, where Gauld was playing under him. When talking about the former Hibs man, Donnelly stated that Gauld’s signing would ‘excite’ Celtic fans and he has ‘undoubted’ ability too.

He said (23:56): “That is a really interesting one. When we worked with Gauldy at United youth, I thought Celtic would be the one he’d move to. But the wee man was a different sort from everybody else. He wanted to try Europe. He’s went there, he’s found it tough at the start. By all accounts at the moment, I’ve seen a post on social media – seven or eight goals.

“He scored against Benfica the other week. He’s always been one that I thought would certainly play for Scotland. I know he went back to Hibs, I watched the game when he came to Celtic Park. He was kind of toiling with an injury, didn’t really set the place on fire. He’s [got] undoubted ability. Maybe that would be one for him to kick on again. Certainly would excite Celtic fans.”

While Gauld certainly has the experience of playing in the Premiership, he has impressed for Farense in the current campaign. In 21 appearances in all competitions, the 25-year-old has contributed to 11 goals. He has seven goals and four assists to his name (as per Transfermarkt).

Even in the Premiership, he scored seven goals and got as many assists in 47 games combined for Dundee United and Hibs.

He has picked up a rating of 7.33 for Farense this season, which is way more than any other player of the club. Those are very promising signs and perhaps, that is why the Hoops should be looking to sign him.