Lipton appeared as a guest on the latest episode of the OTB Football podcast and the panel discussed multiple issues involving the Premier League. One topic of discussion was Doherty and his situation at Spurs. Lipton believes that something in the relationship involving the Irishman and Mourinho isn’t quite right at the moment.

Spurs signed Doherty from Wolves in the summer for a fee of £15 million, with the defender committing to a four-year contract with Spurs. While he has played on the right side of the pitch in multiple games this season, Mourinho played him as the left midfielder against Liverpool in the Premier League recently and has only made nine league appearances so far (as per Transfermarkt).

Has the relationship between Doherty and Mourinho broken down? 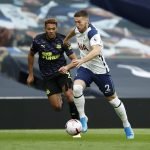 Lipton believes that while Mourinho and Doherty haven’t fallen out, the manager doesn’t trust the player as much as he should.

He said: “Something clearly is awry in the relationship. I’m not saying they’ve had a fallout. He doesn’t appear to have the trust and faith in Doherty as a player that you’d expect, given that he was very much his prime signing – and for a while, it looked as though he might be his only signing of the summer as well, until that late flurry with a few more coming in.”

For Wolves in the 2019/20 season, the £18 million-valued Doherty often played as part of a back five. The Irishman had been the club’s regular option on the right side, playing 32 times in wide-midfield.

At Spurs, though, his role has changed as the 29-year-old has played as a right-back under Mourinho. Since Spurs regularly play in a back four under the Portuguese manager, it would be easy to understand why Mourinho may not be trusting Doherty right now. It may just be a period of adaptation for Doherty and once he adjusts to playing in a back four, Mourinho might use him more often.