Fans of Tottenham Hotspur have taken to Twitter to criticise the performance of Spurs centre-forward, Harry Kane, against West Bromwich Albion.

Having returned from injury well ahead of schedule, Kane was a rather surprising inclusion in Jose Mourinho’s starting XI for the fixture against West Brom.

However, despite Tottenham enjoying much more of the ball and a far greater amount of attacking momentum in the first half of the match, Kane appeared to be slightly rusty, missing one clear cut chance and only hitting the target with one of his four shots.

And, in reaction to his first-half performance, fans of Tottenham took to Twitter to slam the England captain, with many claiming that the striker should already have two goals to his name.

Have you been disappointed by Kane? 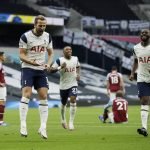 So, what exactly did these Tottenham Hotspur fans have to say about Harry Kane’s performance in the first half?

“Kane should have two”

“Kane!!! 2 weeks out and he needs to get his eye back in! Would like to see us get a good lead in this first half and Kane come off for Vinicius or Bale at around 60-70mins so we can rest him!”

“Yeah, Kane is definitely rusty. That’s the first one-on-one I can ever remember him missing.”

“This is why you don’t rush Kane back”

All in all, it would indeed appear as if these Tottenham Hotspur fans expect more of Kane, however, considering he has just returned from injury, perhaps their comments are slightly harsh on a striker who already has 12 goals and 11 assists in the Premier League so far this season.