A lot of Tottenham fans have been talking about the latest news involving Harry Kane that recently emerged on social media.

A report about Kane recently emerged on the Telegraph and the article had some information the Englishman’s situation at Tottenham. The report stated that Kane is expected to remain at Spurs next season because there seems to be a situation where big clubs may not have too much money to spend on expensive players.

Are you confident that Kane will stay beyond this season? 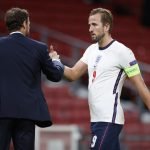 This information about Kane was relayed on Twitter by the Spurs Express and many Tottenham supporters made their views clear about the striker.

What did Spurs fans make of the news about Kane?

It was previously stated in a report by the Daily Mail that Spurs had put up a price tag of £150million on Kane. It was stated that the two Manchester clubs and Paris Saint-Germain are interested in the Englishman.

“No one has the money to buy him, that’s the truth, for us Harry is priceless so lads let’s continue to be happy until he’s with us ;))“

A report from Spanish outlet AS had claimed some days ago that Kane was drawing interest from Manchester United and Man City and a lot of his future could depend on Spurs’ finish and if they manage to secure Champions League football for next season or not.

“Keeping kane hostage for at least another season.”

A lot of these Spurs fans seem overjoyed by the fact that Kane would be staying at the club beyond the summer.

The 27-year-old is currently valued at as much as £108.00 million by Transfermarkt, which makes it rather understandable why clubs can struggle to sign him.
The Englishman has been in fine form this season, having contributed to 35 goals in 33 games in all competitions. In the Premier League, he has scored 13 times, while getting 11 assists, which suggests that his impact isn’t high only because of goals, he’s a goal creator too. Because of that, he’s invaluable to Spurs right now.