Fabrizio Romano has offered fans some relieving words when it comes to the future of forward Harry Kane.

There have been reports recently from Spanish outlet AS that Kane would ask to leave the club “if the team’s sporting situation does not improve”. It’s a narrative that has followed Kane around for some time now, with some people thinking that he has to leave the club if he is to have any chance of winning silverware.

However, speaking on the latest edition of the Here We Go podcast (30:12), Romano reassured fans by claiming that the 27-year-old has never done anything of the sort and is more inclined to sign a new deal rather than leave:

Do you think Spurs would ever sell Harry Kane?

No, they wouldn't sell 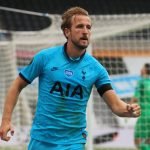 Yes, if he wanted to leave

TIF Thoughts on Fabrizio Romano’s comments about Harry Kane and his future.

Romano’s words must surely come as some form of relief to Tottenham Hotspur fans, because the longer that the club go without winning a trophy, the louder and louder the cries are going to get for Kane to leave so he doesn’t go his whole career without winning anything.

But if he can commit his long-term future to the club, then that is perhaps the biggest indication that he will be staying even if the trophy drought does continue.