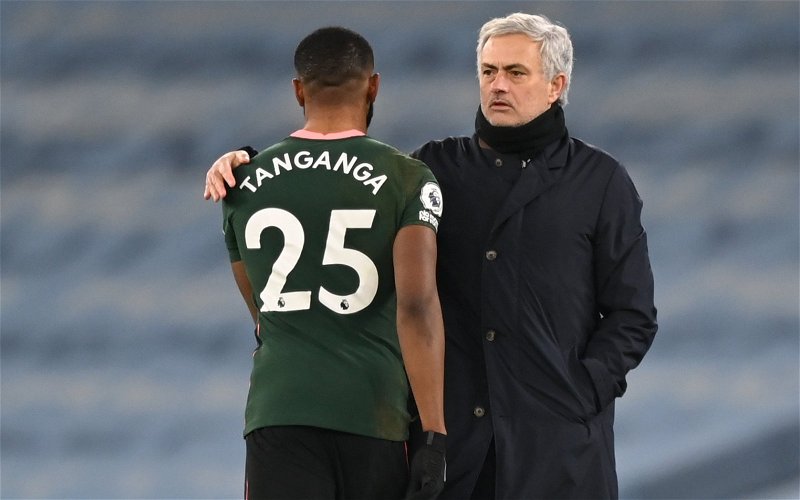 Tottenham Hotspur fans on Twitter have been sharing their praise for young defender Japhet Tanganga after his performance during their recent 3-0 defeat against Manchester City.

This comes after the club’s official Twitter account shared a post on their page that contained footage of Spurs boss Jose Mourinho speaking to the club’s media after the game against Pep Guardiola’s side praising Tanganga for his display in the match.

Mourinho said that he didn’t feel that Tanganga “had any problems and that he was in control against good players and a good team.”

This post then gathered a lot of replies from Spurs fans who were not shy in sharing their thoughts on the defender and his performance against City.

So, what did these Spurs fans have to say in response to Mourinho’s comments on Tanganga and his performance against Man City?

“Really rate him and he needs games!”

“Our best defender yesterday, keep at it mate”

“Best player on the pitch by a mile, only one who could really hold their head up at the final whistle”

“I am a big fan of Tangangas. Very bright future ahead of the lad hope we don’t lose him.”

“Great performance yday from Tanganga. Great speed, aggression and hunger. Needs to be a starter whether he starts at RB or CB”

“Play him more Jose.he’s a gem”

“It seems Tanganga is a perfect defender for 1 on 1 situations. He’s kept the likes of Mane quiet last season. Last night he kept Sterling and Foden at bay. Shame he was next to Sanchez and Dier. May as throw Rodon and Tanganga together. Got nothing to lose now”

“Him and Bale were the only positives after that performance”

“should start every game”

“Here’s a hint. Maybe play him more! Talented lad who puts in a shift. Be nice to see more of Rodon too.”

“Play him more at RB. He done more in one game then Doherty has all season.”

Looking at the replies to this post, it’s clear to see that these Spurs supporters are big fans of Tanganga and were impressed with what they saw from him in the game against the Manchester club, despite the disappointing result.

Should Tanganga be a regular starter for Spurs?

Given how the 21-year-old managed to earn himself a match rating of 6.49/10 for his performance against City with only Harry Kane and Gareth Bale scoring higher, it’s fair to see why these supporters and Mourinho have been singing his praises.

It was only his first Premier League start in a year too, so the 6-foot colossus certainly did himself no harm despite the result.

In our view, if Tanganga keeps putting in decent performances for Spurs when he gets the chance, he would presumably find himself being one of the club’s regular starters, especially with concerns over the right-back spot.