Fans of Newcastle United have been reacting to a post on Facebook, in which Lee Ryder relayed a report of his concerning the loan of Newcastle defender, Florian Lejeune.

In his report for Chronicle Live, Ryder explained that Newcastle are not able to recall Lejeune from his loan at Deportivo Alaves prior to the end of the season, as the recall clause in the centre-back’s loan deal at the La Liga side expired at the closure of the January transfer window.

As such, despite Steve Bruce being left rather short of options at centre-back, with both Jamaal Lascelles and Fabian Schar sidelined due to injury, the Magpies will have to make do with the players they currently have in their first-team squad.

And, after Ryder shared this report on Facebook, fans of Newcastle flocked to have their say on the matter, with many left furious by what they perceived to be Bruce’s poor planning in not utilising Lejeune’s recall option in January.

Was loaning Lejeune out a mistake?

So, what exactly did these Newcastle United fans have to say in reaction to Lee Ryder’s report regarding Florian Lejeune? 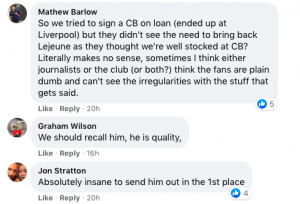 All in all, it would appear that these Newcastle fans are far from happy with finding out that their club can not recall Lejeune, with many stating taking aim at Bruce for letting the £3.78 million-rated defender leave in the first place, while others lambasted the club’s transfer policy.