A lot of Newcastle United fans have been talking about the latest tweet from the club that recently emerged on social media.

The official Newcastle United Twitter account recently tweeted an image involving Javier Manquillo that recently emerged on social media. The tweet carried the emoji which said ‘back soon’ and carried three images of the Spanish defender.

Is Manquillo's return a boost for Newcastle? 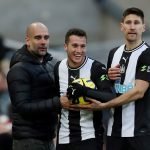 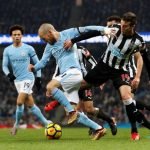 This tweet from the Magpies drew the attention of many fans, who talked about the defender and made their views clear about him.

What do Newcastle fans make of Manquillo?

“Dont rush him back too quick like the Bruce method.“

“That’s is a great view! Glad it wasn’t as bad as we thought!“

Manquillo had sustained an injury earlier this month and he’s missed a total of two games for the Magpies so far. While his return isn’t known yet, but the images of him training should be a positive for the Toon fans.

The Spaniard has made 12 appearances in all competitions this season, having played ten Premier League games. He is yet to score or assist for the club this season.
“Please say he’s back so we don’t have to put up with Krafth.”

“This has made my day”

A lot of these Newcastle fans are pretty happy about Manquillo’s return to training, as some of them feel that Emil Krafth isn’t a great player for the.
The 26-year-old has picked up a rating of 6.43 in the Premier League this season and 15 Newcastle players have picked up a better rating than the Spaniard. Krafth though, has picked up a less rating than him and this suggests that Manquillo has had a better campaign.