Former Premier League referee Mark Halsey has recently discussed whether Ruben Dias should have been sent off in Liverpool&#8217;s recent game against Manchester City.

Halsey was recently talking exclusively to This Is Futbol and the referee discussed multiple talking points from the recent Premier League game week. One game that he did talk about Liverpool’s 4-1 hammering at the hands of Manchester City.

Dias had ended up fouling Mohamed Salah in the second half and this gave Liverpool a penalty. The Egyptian had stepped up to take the spot-kick and he ended up making it 1-1 (as per the Guardian).

Did Dias deserve a red card? 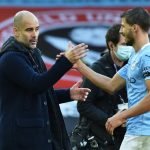 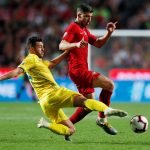 Halsey discussed whether there was a possibility of Dias being sent off for the foul on Salah. He said: “No, because if you look, Stones was coming around. So there is doubt there as to whether that was a goalscoring opportunity. Also, would he have gained control of the ball again? It was questionable. I think that was the correct outcome.

“I mean, a lot of people are saying – there wasn’t enough force to make him [Salah] go down. If you don’t go down, he doesn’t get a penalty. So you can’t blame Salah going down the way he did. It’s a penalty.”

In the game at Anfield, Dias picked up a rather mediocre rating of only 6.26. He won just a single aerial duel and made just one tackle too. The Portuguese managed to make one interception, completing four clearances (as per Whoscored).

The defender has picked up a decent rating of 6.97 in the Premier League this season for Man City and only ten players have picked up a better rating for the Citizens than the 23-year-old (as per Whoscored).

This shows how important a player he has been for City and the fact that he stayed on the pitch might have impacted Liverpool, considering how they could get only three shots on target in the whole of 90 minutes.

The Liverpool front three was largely neutralised and none of Salah, Roberto Firmino or Sadio Mane came close to picking up a rating of 7 or above. So a sending off for Dias might have impacted their performance positively.