Pundit Robbie Mustoe has recently hailed the performance of Jordan Pickford in Everton’s win over Liverpool in the Merseyside Derby.

Mustoe appeared as a guest on the latest episode of the Two Robbies podcast and the panel discussed multiple issues involving the Premier League. One topic of discussion was Everton’s 2-0 win over Liverpool in the Merseyside derby and Mustoe talked about Pickford’s performance. He hailed the Englishman and he believes that Pickford’s contributions shouldn’t be under-appreciated in the game.

Goals from Richarlison and Iceland midfielder Gylfi Sigurdsson helped Carlo Ancelotti’s men to a 2-0 win over Anfield. It was their first win at Anfield over Liverpool since 1999 and it was also their first Merseyside derby win since 2010 (as per BBC Sport).

Was his performance against Liverpool the best of Pickford's season? 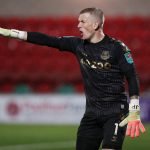 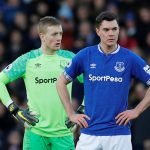 Pickford had featured in the game and Mustoe believes that the former Sunderland man came up with a ‘top’ performance when the pressure was on him because of the incident involving Virgil van Dijk in the previous derby.

Mustoe said (4:46) “I thought some of the saves he made and the Jordan Henderson save where you know, I was in the studio with Tim Howard and Tim Howard was like- wow, that is an amazing save. The speed that he got across and just got his fingertips to the ball, take it around the post. Other important saves later – Mo Salah when he went through.

“I just thought, you know, I’ve got to be honest. I don’t know whether he should be England’s number one, but in this game, he shouldn’t be under appreciated. Because that was a top performance of a player that’s under pressure given what he did to Virgil Van Dijk in the reverse fixture back in October, whatever it was. That totally derailed Liverpool’s season. So big performance from Jordan Pickford in a situation where the pressure was on him. He had to make some big saves. And he did.”

The £23.40 million-rated Pickford picked up an impressive rating of 8.06 against Liverpool and he was also Whoscored’s Man of the Match for the tie. That was actually the highest rating that he has picked up this season for Everton in all competitions (as per Whoscored).

It shows that the performance was certainly a great one and considering that it was the highest rating that he has picked up this season, he deserves credit for it – especially since it came in a big game.