Speaking recently on the Here We Go podcast, Fabrizio Romano discussed Leicester City’s interest in a move for an ‘important’ midfielder this summer.

Brendan Rodgers’ side have highly impressed so far this season, with the Foxes winning 13, drawing four and losing six of their 23 Premier League fixtures, results which have left the club in third place in the top-flight table, just seven points behind league leaders Manchester City.

In addition to this fine domestic form, Leicester have also impressed in Europe, with the side successfully navigating their Europa League group, setting up a tie with SK Slavia Prague in the knockout stages of the tournament.

And, speaking on a recent episode of the Here We Go podcast, Fabrizio Romano revealed that the Foxes are planning ‘important’ improvements to their side once again this summer, with the journalist claiming that Rodgers is working on signing a big midfielder in the close season.

He said: “Let me say, [on the subject of] midfielders, [we should] talk a bit about Leicester. They have a good strategy, they are having an amazing season and also Leicester are moving for a midfielder. We will see what will be the name, [I am] working on it, but they are moving for an important midfielder.”

Will Leicester make the Champions League? 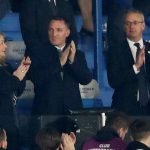 As such, while Romano does not mention a name as to who this ‘important’ midfield target could be, if the journalist is to be believed, Rodgers is looking to add to his already impressive options of Wilfred Ndidi, Nampalys Mendy, Daniel Amartey, Youri Tielemans, Dennis Praet, Marc Albrighton, Harvey Barnes and James Maddison this summer.

Whether this means one of the club’s current options could be on their way out of the King Power Stadium, or if Leicester’s scouts have simply found an opportunity to sign an exciting talent, remains to be seen.

However, if the Foxes can keep up their current form over what remains of the season, the offer of Champions League football will certainly not harm the club’s chances of landing their desired targets this summer.