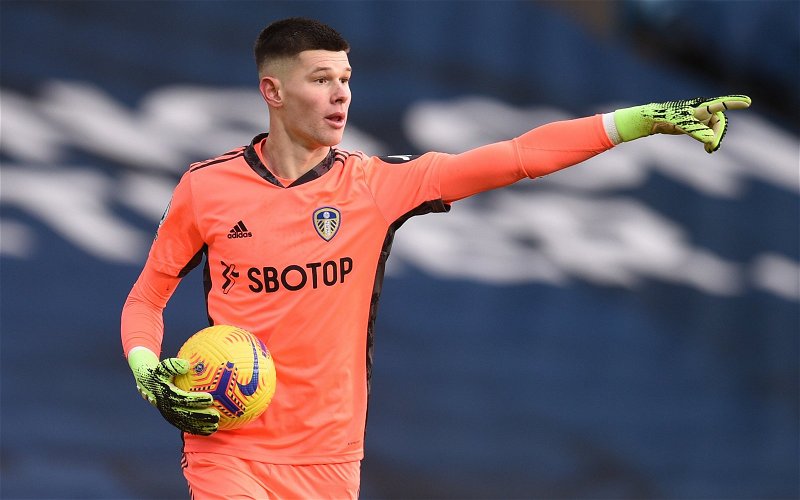 Leeds United fans on Twitter have been sharing their criticism for Whites goalkeeper Illan Meslier and his performance for the Yorkshire club during the first half of their Premier League clash away at Arsenal.

Coming off the back of a 2-0 victory against Crystal Palace at Elland Road, Marcelo Bielsa’s side travelled to London to take on Arsenal in their latest league fixture.

During the first half of the match at the Emirates, a lot of Leeds fans were far from impressed by what they saw from the French shot-stopper with many taking to Twitter to share their frustrations.

His distribution was all over the place, making only 70% of his passes, and he also conceded an embarrassing penalty kick on the stroke of half-time to give the Gunners a two-goal advantage.

That was before Hector Bellerin made it 3-0 just minutes later.

So, what did these Leeds fans have to say about Meslier’s performance in the first half against Arsenal?

“Meslier’s distribution has me having kittens at times”

“Page one mistakes from Meslier there, easy ball out and a near post concession. If that’s Kiko he’s getting grilled, that’s not good enough. #LUFC“

“Someone really needs to teach Meslier how to pass. 3-4 times every game. That’s dreadful #lufc“

“Meslier distribution has been woeful”

“Any chance we could have the meslier from his debut at arsenal ? He could pick out any player on the pitch right to their feet. Today he’s struggling #lufc“

“Meslier with the ball at his feet is an accident waiting to happen. NOT his fault, but he should never be asked to do this. #lufc #mot“

“Meslier is having a stinker here causing us issues #lufc“

“Meslier great keeper but a liability when ball at his feet, poor kick out for first goal and then the penalty”

Looking at these tweets from this group of Leeds fans, it’s clear to see that they were not best pleased by what they saw from Meslier during the first half against the Gunners, particularly with his distribution.

Was Meslier to blame for Arsenal's first goal?

Moving forward, these Leeds fans will undoubtedly be hoping that Meslier, who is currently valued at £10.8 million, can improve on his first-half display and put in a better shift in the second half.

Bielsa’s men have it all to do.