Leeds United fans on Twitter have been sharing their thoughts on the latest comments made by Whites manager Marcelo Bielsa on Joe Gelhardt.

This comes after @LeedsUnitedYEP shared a post on their Twitter page relaying comments made by Bielsa on the young striker.

On the topic of Gelhardt, Bielsa said that the 18-year-old is a player that ” that always creates danger in a game.”

This post then gathered a lot of replies from Leeds fans who were quick to share their responses on the matter.

So, what did these Leeds fans have to say in response to Bielsa’s comments on Gelhardt?

“Give him a chance”

“Should have come on against wolves”

“Look forward to him getting a chance. Hernandez did nothing on Friday bless him. #lufc“

“I think when bielsa knows we are safe, him and other kids will have game time in first team”

“Well why wasn’t he brought on on Friday ? Give the new lads a chance .”

“I think we’ve learnt what’s coming by how he describes a player. I think this can be interpreted as “ he’s not far away from being involved”?”

“He looks great but I’m not letting myself get too excited over the 23’s. Think Gelhardt is a cracking player but Bielsa just reluctant to use him so he’s not getting any football atm which is crazy”

Gelhardt, who is currently valued at £1.17 million, joined the Yorkshire club back in August from Wigan Athletic for a fee of £900k.

Since then, the striker has made 12 appearances for Leeds’ U23s in which he managed to score seven goals and provide two assists along the way (per Transfermarkt).

For Leeds’ senior side, the teenage sensation has been an unused substitute for their three previous league fixtures.

Do you think Gelhardt should get a chance to play this season? 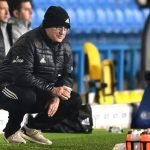 Looking at the replies to this post, it appears that these Leeds fans would be excited to see Gelhardt finally get a chance to prove himself with the rest of the senior players in the Premier League at some point this season.

In our view, Bielsa should give Gelhardt some playing minutes in the league instead of just keeping him on the bench.