Many Leeds United fans have been fuming at Jason Cundy after some of his comments recently emerged on social media.

Cundy recently appeared on the TalkSport and talked about Leeds. He believes that the Whites get too much praise. He feels that while you want to see teams attack like Leeds do, they can often defend like they are in the ‘pub league’ as he referred back to the goal that they conceded in the recent loss to Everton.

He said: “They’re just a funny side, Leeds – they will give you opportunities. I think they get too much praise, I do.

Is Jason Cundy right about Leeds? 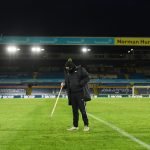 A video of Cundy giving his opinion about Leeds was relayed on Twitter by TalkSport. Many Whites fans made their views clear about him.

What did Leeds fans make of these comments from Cundy?

“8 players started last night who were named in his 1st ever game for us against Stoke in 2018 , 2 international CB out injured almost all season, newly promoted team. … 4pts off his multi-million-pound team.”

“No Leeds fan is interested in what Jason Cundy has to say. We are enjoying watching great football with a championship team going head to head with squads assembled at a cost of 100’s of millions £. If he does not like it watch something else.”

“What do these clowns expect from a newly promoted side that has had ridiculous injury problems at the back all season? Are we supposed to be challenging City for league.”

Marcelo Bielsa’s men recently lost 2-1 to Everton. The Toffees had gone 2-0 up in the first half as Raphinha struck early on in the second half to make it 2-1, but they could not find an equaliser. The Whites currently find themselves in 11th in the Premier League and they are as many as 15 points away from the relegation zone.

Leeds have scored 36 goals in the league – only four sides have scored more in the top flight. Having said that, they’ve also conceded the second-most number of goals. Leeds fans continued to fume at Cundy’s comments.

“Half of the defence is out injured. Clueless.”

“No! We have just been promoted. Drawing to teams like city is Brilliant. Being harsh when we are new to premier league! #lufc If you talk about us everyday then name it talk Leeds.”
Credit: @LewisWatsonLUFC
“Serious question “who’s Cundy ? “ never heard of him.”

A lot of these Leeds fans are fuming at Cundy’s comments and feel that their club is doing just fine right now.
This is Leeds’ first season back in the top flight and despite their defensive record, they have picked up impressive results, including against title-chasing Leicester City only last weekend.
That, along with their current league position is a positive sign, and considering the injuries that have been suffered by the likes of Robin Koch, Liam Cooper and Diego Llorente, it is understandable why the club’s defence hasn’t been great this season.