Many Celtic fans have flocked to Twitter to share some concern over the possibility that club captain Scott Brown will play in Saturday’s Old Firm clash.

This comes after former Celtic player Charlie Nicholas recently declared that though he’s aware “there will be a big debate” about whether or not Brown should play in this meeting with the Premiership leaders, he feels that Neil Lennon is likely to bring the 35-year-old back into the starting XI.

Additionally, per The Daily Record, several alleged leaked Celtic teams have appeared online ahead of this fixture, brewing uncertainty about what Hoops team will start at Ibrox, with the question of what role Brown is to play versus Rangers remaining one of the key talking points heading into Saturday’s derby clash.

So, what have these Celtic fans been saying about Scott Brown ahead of Saturday’s Old Firm clash?

Plenty of Hoops supporters have taken to Twitter to share that they think Lennon would be making a mistake by starting Brown versus Rangers, with the Scotsman having not started any of Celtic’s last four Premiership games.

“Given Celtic’s recent form I had been pretty optimistic about today. Now I’m reading worrying reports of Lennon possibly starting Brown and applying a cautious, containing approach. If that’s correct, we might as well just not turn up.”

“Hoping that leaked team is a lot of nonsense as it gives me the fear. There’s no requirement for brown. Could understand needing his experience if 50k rangers fans baying for blood but not in an empty ibrox. The truth is no Celtic player has that exp. play the players in form.”

Should Brown start versus Rangers? 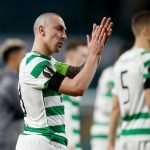 “If Lennon plays Brown and doesn’t start either Soro, Turnbull or Griff he’s asking for trouble”

“See if he announces Brown in the lineup or 1 up top. He should be sacked before kickoff.”

All in all, it certainly seems that despite Brown having enjoyed plenty of success during his time at Parkhead, many fans of the Glasgow club would be worried by his presence in the starting XI on Saturday and it will be interesting to see if Lennon shares their view.