Supporters of Celtic have recently reacted to an image of Neil Lennon and Scott Brown that has emerged on social media.

According to a recent report by The Scottish Sun, the Hoops were set to fly out to Dubai for a warm-weather training camp following the Old Firm derby on Saturday.

Supposedly, this was despite the fact that there had been ‘major question marks’ raised over the trip due to the current viral infection.

The image which emerged on social media was allegedly from this warm-weather training camp and was shared by Celtic-based site Celts Are Here.

In the photo, Lennon and Brown are pictured by a pool despite the fact the trip was claimed to not be a holiday, however, it is admitted that it is not certain the photo was taken during the current trip.

The report containing the image was shared on the Celtic News Now Facebook page and it had lots of fans talking.

So, what did these Celtic fans have to say about the image of Scott Brown and Neil Lennon? 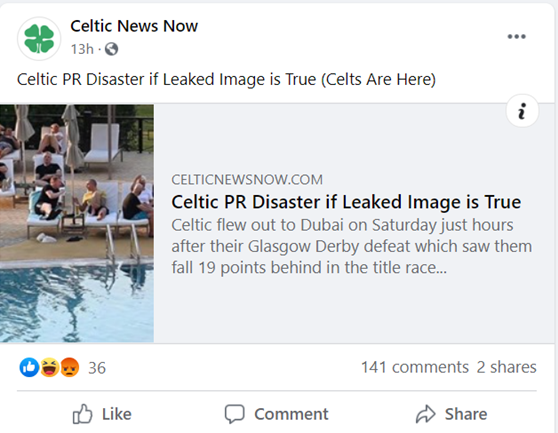 During the Old Firm derby, a second-half own goal from Callum McGregor sealed a 1-0 victory for Steven Gerrard’s side at Ibrox (per BBC).

Should Celtic have gone on the warm-weather training camp?

No, was a bad idea

Yes, it was needed

The defeat has left Lennon’s Bhoys trailing their rivals by a whopping 19 points, however, they do have three games in hand on Gerrard’s outfit.

While the points gap between the two clubs is hefty, the defeat was only Celtic’s second league loss of the season, having won 13 and drawn four of their opening 19 matches.

As can be seen in these responses from Celtic fans, while some felt that the image was not a good look if it was taken recently, many others were not bothered.