Celtic podcaster Kevin Graham has cast some doubt over Damien Duff returning to the Hoops in a coaching capacity.

Last week, it was announced by the FA of Ireland that the former winger had departed his position as a coach in Stephen Kenny’s Ireland set-up.

The 41-year-old coach had only taken up his position with the national team in August after leaving the Bhoys earlier in the year (per Transfermarkt).

Upon his departure, Duff said: “I want to thank Stephen Kenny for the opportunity he gave me to coach with the senior Ireland team and I wish Stephen, Keith and the players all the very best of luck for the upcoming World Cup qualifiers.”

During the latest episode of the A Celtic State of Mind podcast, Graham aired his thoughts on a possible return to Parkhead for the coach. (18:17)

He said: “This could be a situation where [it’s like when] a player leaves [and then] suddenly becomes a world-beater – Damien Duff’s left and all of a sudden, we’ve turned into mince.

“So, they’ve [gone], ‘Oh, it’s Damien Duff. He must have been the brains behind the operation.’

“The reason that Duff left was because of the pandemic and he wanted to go back to his family and that situation hasn’t changed from when he left in the summer – it’s got worse.

(20:02) “I can’t see Damien Duff coming back in unless it was part of a new coaching set-up, unless he was coming in to assist John Kennedy – if Neil [Lennon]’s not going to be hanging about much longer.

“I could maybe see Duff coming back in on an interim basis to give Kennedy a dig out.”

TIF Thoughts on what Kevin Graham said about Damien Duff…

As can be seen in what the podcaster had to say, he believes that it is doubtful that the Irishman will return to Parkhead unless Lennon will not be at the club for much longer.

Who would you rather have at Celtic Park? 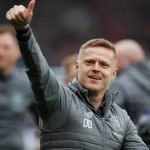 With Duff having been with the Hoops for a trophy-laden 16 months, it is clear to see why some supporters may be wishing that the coach comes back.

However, if he did indeed leave Parkhead to be closer to his family during the current global pandemic, it does seem unlikely he would come back with lockdowns in place across the UK.