Many Celtic fans have been talking about the club’s links with a move to sign Stade de Reims starlet Nathanael Mbuku.

French outlet FootMercato has stated that Celtic have made an approach to sign Mbuku with an attempt to start negotiations over a potential deal. It stated that Reims currently want a fee of €8 million (£7.2 million) and while Celtic are interested, Italian side Parma are also in the running. Lille are also keeping an eye on the 18-year-old winger but they want to do a deal in the summer. 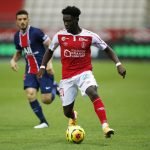 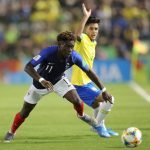 The update was relayed on Twitter by CelticBible and many Hoops supporters made their views clear about it.

What did Celtic fans make of these Mbuku links?

“If true wont get a game be mad to sign.”

“Like the fact it’s a winger but doubt he gets game time for a while.”

“Lenny will fire him right in the reserves.”

Mbuku is already a regular for Reims, despite being just 18 years of age. He has made 13 appearances in Ligue 1 for the side and has scored once, assisting once too. He made his debut in the French top flight last season, when the youngster played 11 league games. He is currently valued at £7.20m.

He played for multiple clubs at the youth level but has come through the ranks at Reims. Other Celtic fans also made their views clear about Mbuku.

“Imagine us having to look at France for an extremely talented and skilful young winger who is left footed…..couldn’t imagine us finding one closer to home, like maybe in our development squad.”

“You would be an absolute idiot to move to celtic as a younger player because they never get played, we totally waste there time & they don’t even get put in the match day squad!”

“He’ll be buzzing to sign for a big club…then sit on the bench.”

Some Celtic fans believe that Mbuku shouldn’t join Celtic as the Hoops may not help his development as a player.

Considering the fact that Mbuku already has first-team experience though, he might just be a regular player at Celtic as well. The teenager can play on the left and right flanks, while Celtic currently have two out-and-out options for the left flank and no established options on the right wing.

So Mbuku will add depth in these areas of the pitch and since he’s still very young, he may only improve in the future.