Many Celtic fans have been discussing a tweet about Shane Duffy that recently emerged on social media.

Sky Sports journalist Anthony Joseph recently relayed a tweet about Duffy’s situation, saying that the Irish central defender will stay at Parkhead until the end of the current campaign. The tweet stated that while reports had talked of a possible approach from Nottingham Forest, the Championship side haven’t made any offers and the Reds aren’t looking for a centre-back in January. 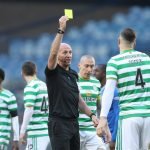 This tweet from Joseph caught the attention of multiple Celtic fans, who gave their views about the Brighton loanee’s situation.

What did Celtic fans make of this update about Duffy?

“You’re just the bearer of bad news you int ye.“

“Were short in that position as it is. Wouldnt make sense to let go.”

“This year just gets worse and worse.”

Duffy had arrived on loan from Brighton in the summer transfer window and he had started his Celtic career well, scoring in the first two Premiership games. He went on to pick up pretty underwhelming ratings in games against the likes of Lille, Milan, Sparta Prague, Motherwell, Hibernian and Aberdeen (as per WhoScored).

Recently, Celtic assistant boss John Kennedy had made it clear that Duffy is in the club’s plans for the season and the club wanted to give him more time to sort things out.

“It just keeps getting better and better??”

“One day you’ll give us good news Anthony.“

While Duffy’s ratings in some games do suggest that he’s had a poor season for Celtic, the Hoops are expected to be without Christopher Jullien for the next four months and Hatem Abd Elhamed has been linked with a Parkhead exit as well.
Because of that, Celtic need numbers in defensive positions and letting Duffy leave won’t make sense.