Many Celtic fans have been discussing an update about Ben Davies that recently emerged on social media.

Sky Sports journalist Anthony Joseph has recently tweeted a transfer update about Celtic, saying that the Hoops have now signed Davies on a pre-contract basis and the defender will leave Preston North End at the end of the season before joining the Parkhead-based outfit on a free transfer. He also went on to claim in a later tweet that there was a chance the deal could be done in the current window if a fee could be agreed.

Is this a good signing for Celtic? 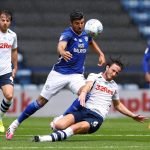 This tweet from the Sky Sports journalist has caught the attention of many Celtic fans, who gave their views about the club’s capture of the Englishman.

What did Celtic fans make of this update about Davies?

Davies has been a regular for Preston in the current Championship season and has made 18 appearances for the side. The 25-year-old has picked up a rating of 6.84 for his team and he has been the club’s sixth-best rated player in the campaign. Even in the 2019/20 season, he was Preston’s tenth-best rated player.
“The rebuild begins”
@ThePundit_

“Good signing . Left footed CB – sensible . Ideally get him now, to get imbedded into the team. Happy with that to be fair .”

“Some positivity for a change. Now get the guy in now and bedded in for next season”

While his ratings suggest his quality, Celtic’s Kristoffer Ajer has been linked with a move to Milan in recent months. Hatem Abd Elhamed has also been linked with a Parkhead exit and Shane Duffy is only on loan from Brighton.
This shows that Celtic’s defensive outlook is uncertain and because of that, they may need more recruitments in that position. Davies’ signing may just be the beginning of this drive.