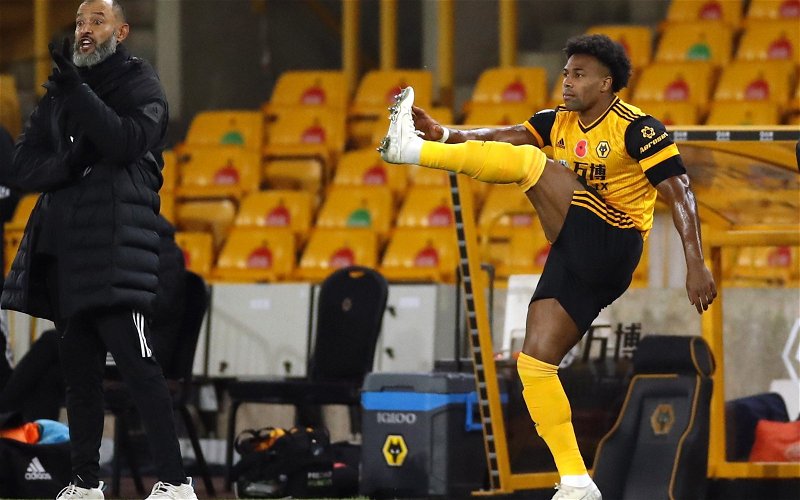 The Express and Star reporter Joe Edwards has been discussing the recent form of Wolverhampton Wanderers winger Adama Traore.

During the current Premier League campaign, Traore has made 16 appearances for the Old Gold, in which he has neither scored a goal nor provided and assist for a teammate (per WhoScored).

In fact, the last goal which the attacker scored for Wolves in the top flight came all the way back in December 2019, during the 3-2 victory against Manchester City (per Transfermarkt).

His performances this season, though, have still been fairly respectable as he has been the sixth-best performer in Nuno Espirito Santo’s squad with a 6.83/10 average rating.

During the latest episode of the E&S Wolves Podcast, Edwards discussed Traore’s form and revealed a factor which he believes may be affecting the Spaniard. (27:39)

He said: “I think it’s [undoubtable] that the best players that he linked up with last season were obviously [Raul] Jimenez, [Diogo] Jota and Matt Doherty.

“Matt Doherty and him were completely in sync. If one went, the other covered, vice versa, one-twos, channel runs. It was clockwork really – him and Matt Doherty – and they really worked well together.

“Of course, we can’t make excuses for him, I think there is definitely an onus on Traore to improve his own game. Naturally, when he plays, because of the pace and power that he’s got, he’s always going to cause problems.

“I think that’s almost a prerequisite for Traore, that he’s going to cause some issues because of how immensely gifted he is in terms of physical attributes.

“He is going to cause problems but he’s not doing enough, his deliveries aren’t where they were.”

TIF Thoughts on what Joe Edwards said about Adama Traore…

As can be seen in what the journalist had to say, he believes that Doherty’s departure in the summer may have had an impact on Traore, however, he still needs to be doing better.

Has Matt Doherty's departure had a negative impact on Adama Traore?

No, it's not an issue

Yes, it's been an issue

Certainly, looking at his statistics from last season, it is clear to see that the 24-year-old forward is performing far worse this season as opposed to last term.

During the 2019/20 campaign, Traore was Wolves’ best-performing player in the league with a stellar 7.49/10 average rating (per WhoScored).

So, while his 6.83/10 average rating this season is by no means poor, it is clearly nowhere near the level he can perform at.