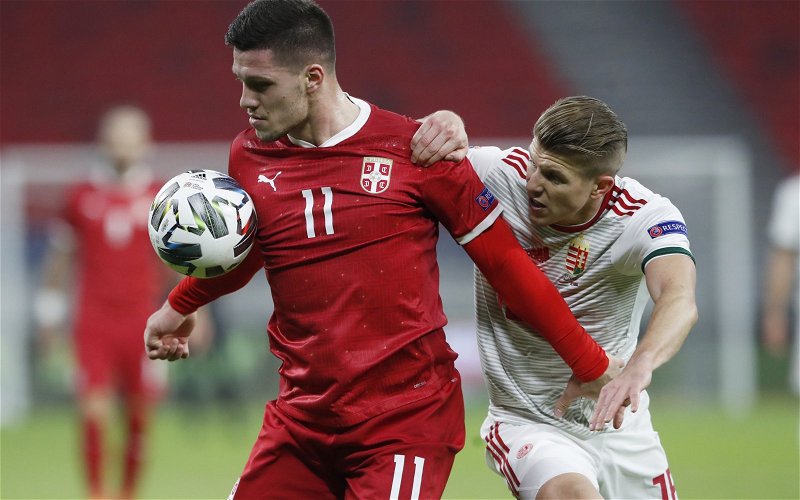 Dave Hendrick, the host of The Two Footed Podcast, has been speaking on the latest edition of the podcast about transfer news and suggested signings for many Premier League clubs.

One team that Hendrick spent a bit of time on was Wolverhampton Wanderers, and the podcaster suggested Luka Jovic as a signing for Wolves.

Raul Jimenez is currently out injured with a fractured skull, and that has left Fabio Silva as the one natural striker that Wolves have in their team.

So Hendrick thinks that Nuno Espirito Santo’s side need to buy a forward and that they should look at Jovic, who has been linked with a move to Molineux.

“I know the Diego Costa thing that I started is going around a little bit.

“But, Luka Jovic of Real Madrid absolutely had a horror of a time at Real, doesn’t suit playing as a lone striker but in a two as he played at Eintracht Frankfurt, lethal.

“I think he could work in that Wolves team.

“Then when Jimenez comes back, I think he will work even better because those two together could be lethal.”

Yes, he could be a great signing

The Serbian striker moved to Real Madrid in the summer of 2019, but he has only made 32 appearances for the club in which he has scored just two goals, and with Real apparently assessing their options, Wolves could swoop.

During the 2018/19 season, Jovic was superb for Eintracht Frankfurt as he scored 27 goals and provided seven assists, so if he could rediscover that sort of form, then you would think Wolves could be making a good signing if they do decide to try and bring Jovic to their club.

Silva has battled manfully on his own for the last seven league games, but he has only scored one goal, and so we agree with Hendrick that it might be time for Wolves to bring in another forward, and Jovic could be that man.