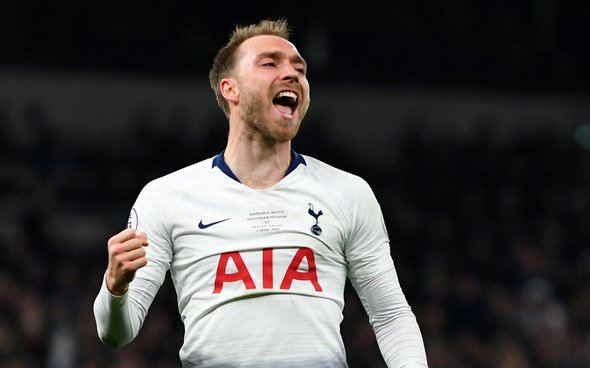 Tottenham Hotspur fans have been reacting to some footage of Christian Eriksen from a recent game for Internazionale.

The 28-year-old midfielder has been the subject of much speculation about a potential return to North London recently, but after last night’s events, his current club might not be willing to let him go.

The Danish midfielder struck an injury-time winner against rivals AC Milan in the Coppa Italia, showing that whilst his numbers might be down compared to previous seasons, you can never write him off to come up with a little bit of magic.

And it made Spurs fans a little bit emotional about seeing him at his best again, with some using it as a perfect reason for the club to make the deal happen, saying he’s just what the side need right now:

“I would still love him back at Spurs, no matter what others say, he is still a master in his class”

@Alwaysblue888
“There are still people out there who think signing him wouldn’t improve us”
@_JoeGTHFC
“Nice to see that he’s still got it. He deserves a chance to fight for playtime at inter, spurs or someone else”
@sissoko_goat
“Ok maybe he’s still got it”
@Georgechamps7
“We need to go for this guy before they change their mind though We don’t even have set pieces taker in our team If I see Dier behind our free kicks I just know it will be over the bar lol #bringbackEriksen“
@mr_president789
“#24… what did you expect?”
@RuiMMotta
“Wow”
@blake_woolmer

Would you take Eriksen back at Spurs?

With just a few days left in the window, there’s not long to get the deal done if Tottenham and Inter are going to go through with it.