A lot of Tottenham Hotspur fans have flocked to a post from The Spurs Express, which has relayed transfer news from Alasdair Gold.

Gold, speaking on a recent Twitter video by Tottenham News, claims that Tottenham will not be making a move for either Eder Militao or Kim Min-Jae, who have both been linked with moves to Spurs in this transfer window.

The journalist also compiled a report on Tottenham’s transfer targets, in which various links with January moves were dismissed.

This has drawn the attention of these Spurs fans, who are gutted.

“kissing a mild goodbye to the title. Hope we finish top 4”

“Pretends to be shocked ..”

Do you think Tottenham will sign a centre-back this month?

No, we won't get anyone 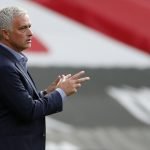 Yes, something will happen

Tottenham are on somewhat of a poor run in the Premier League at the moment and have only won two of their last seven league fixtures.

According to journalist Duncan Castles, Jose Mourinho wants another centre-back in this transfer window to boost his squad, but it looks like he won’t be signing Militao or Kim Min-Jae.

This post continued to draw in upset Tottenham fans.

“Will be a mistake if we don’t bring anyone in.”

“I THOUGHT IT SAID EXPECTED WHYYYYYYYYYY”

It remains to be seen if Spurs do make a move for a centre-back in this transfer window or if they leave Mourinho with what he has.

Certainly, these Spurs fans are not expecting their club to do any business.