Supporters of Tottenham Hotspur are buzzing after Spurs shared some comments which were made by Pierre-Emile Hojbjerg.

During the summer transfer window, the Danish midfielder was brought to the Tottenham Hotspur Stadium from Southampton in a £14.94m deal (per Transfermarkt).

The 25-year-old middleman arrived at the club having made 134 appearances for the Saints, in which he managed to bag five goals and provide six assists for teammates.

On Saturday morning, the north London club shared some comments from the midfielder in which he discussed his motivation to push himself in his career.

After the comments were shared by Spurs, lots of supporters flocked to them to gush over what the Dane had said.

So, what did these Spurs fans have to say about Pierre-Emile Hojbjerg’s comments?

“Give him the armband please”

“Great player already but combined with this great attitude…we are very lucky to have him!”

Having signed for Spurs for £14.94m during the summer transfer window, his market value now stands at almost double that as it has risen to £27m since he signed for Jose Mourinho’s side.

Does Hojbjerg have the potential to be a Spurs legend? 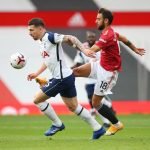 “Rarely seen a better tackler, and good passer too”

“Man I love this man so much”

So far this season, the 25-year-old Dane has made 18 appearances in the Premier League, in which he has not scored but he has assisted twice (per WhoScored).

His performances, though, have been more impressive than his return in front of goal as a 6.97/10 average rating has made him the joint-fifth-best performer in Mourinho’s squad.

As can be seen in these responses from Spurs fans, many of them were keen to gush over Hojbjerg after the club shared his comments on social media.