Many Tottenham Hotspur fans have been discussing a news update about Jesse Lingard that recently emerged on social media.

Spurs-oriented journalist Alasdair Gold has recently revealed details about Lingard, saying that Tottenham are currently not looking to sign the Englishman from Manchester United. The journalist wrote an article which had information about Lingard and stated that Spurs weren’t even interested in Lingard in the summer transfer window, when similar reports had emerged.

Are you glad that Spurs aren't after Lingard? 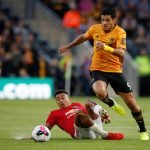 This update about the midfielder was relayed on Twitter by Daily Hotspur and many Spurs fans made their views clear about it.

What did Spurs fans make of this news about Lingard?

“As I said every transfer window since jose became manager we linked with lingard and its always nonsense.”

“This feels as good as a new signing.”

At Manchester United under Mourinho, Lingard played 107 games in all competitions for the Red Devils. He had scored 20 goals while picking up 11 assists for the team.

This season, though, the Englishman has struggled for game time under Ole Gunnar Solskjaer, playing just three times in all competitions and he is yet to play in the Premier League. He has played twice in the League Cup and once in the FA Cup (as per Transfermarkt).

Some other Spurs fans also flocked to this update and seemed very happy about it.

“Thank goodness for that.”

Some Spurs fans are glad that their club isn’t looking to sign Lingard and they seem relieved by Gold’s update. Given his lack of goal threat in recent months, perhaps that’s not too surprising.
In the 2019/20 campaign, Lingard had scored only four goals in all competitions for the Red Devils, despite playing as many as 40 games under Solskjaer. This clearly shows that Lingard may not be good enough for Spurs and it is understandable why Tottenham fans are delighted that Mourinho isn’t said to be looking to reunite with the Englishman.