This comes after the official Spurs Twitter account shared a post on their page that contained the footage of Bergwijn during a recent training session at the north London club’s training complex alongside his teammates.

The footage shows Bergwijn scoring a chipped goal past Joe Hart in net after passing his way up the pitch in a training match.

This post then gathered a lot of replies from Spurs fans who were quick to share their thoughts on this footage of the winger.

So, what did these Spurs fans have to say in response to this footage of Bergwijn?

Some fans were over the moon with what they saw from Bergwijn.

“So much talent that’s been bottled up since he got here, play fearless and score more goals he’s so so good”

Spurs signed the 23-year-old, who is currently valued at £25.2 million, back in the previous January transfer window from Dutch side PSV Eindhoven for a fee of £27 million.

Looking at the replies to this post from the official Spurs page, it appears that while some supporters were impressed by the footage of Bergwijn.

Do you think Bergwijn has been good enough for Spurs this season? 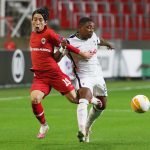 Howver, has failed to score a goal and has only provided one assist in the Premier League and has earned himself a disappointing season rating of 6.36/10 for his performances in the process, so it’s understandable why one fan wants him to bring this kind of finishing into a game situation.