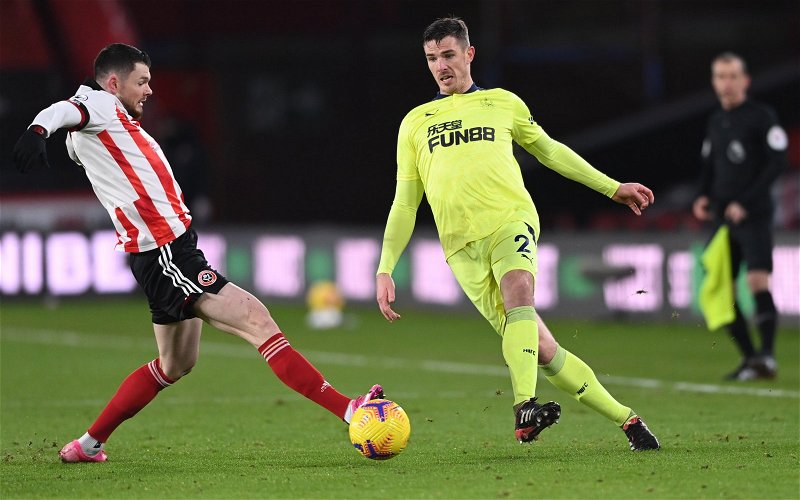 A lot of Newcastle United fans have flocked to a post from NUFC 360, which has relayed news from The Daily Telegraph about Ciaran Clark.

Steve Bruce had claimed in recent weeks that he was looking to tie Clark down to a new deal, while The Telegraph’s report suggests that the 31-year-old is now set to sign a new deal with Newcastle, with his current contract expiring at the end of June.

The Republic of Ireland international has been solid in the Premier League this season and has earned an average rating of 6.88/10 from his nine league appearances.

This puts him in third place in the Toon’s squad, so he has clearly had a positive impact on Newcastle this season, and it is no wonder that they want to extend his contract.

Certainly, this news has pleased many Toon fans who are happy he is staying but don’t know why he would want to under Steve Bruce.

“Wow. Happy for us that he’s staying. But dont think its good for his career”

“Feel sorry for him”

Are you happy with this?

Yes, he is a solid defender

No, we should let him go

Clark was signed by the Toon in the summer of 2016 and has made 102 appearances for the club since in which he has also scored 11 goals, so he has proven to be quite a handy addition.

This post continued to draw in Toon fans who were happy with this news.

“Good for a promotion push”

“When fit has always been one of our best players, makes the odd mistake but who doesn’t.”

The former Aston Villa man has had spells out injured and also just being left out of the team while he has been at Newcastle, but in most seasons whenever he has played he has been solid, so we think this is a good idea, and we hope that the contract is sorted out quickly.