Pundit Stephen Doyle believes that Rangers’ Steven Gerrard has an eye on the Liverpool managerial role and he wants to do that job in the future.

Doyle appeared as a guest on the latest episode of the OTB Football podcast and the panel discussed multiple issues involving English football. One topic of discussion was 40-year-old Gerrard’s progress as a manager with Rangers and Doyle feels that the Liverpool legend has an eye on the job at Anfield and he wants to take over from Jurgen Klopp in the future.

Gerrard’s Rangers side are at the top of the Premiership table and have a 19-point lead over Celtic in the title race. His side has scored the most number of goals in the division and they’ve also conceded only five goals in the whole campaign (as per BBC Sport).

Will Gerrard manage Liverpool in the future? 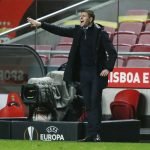 While that is impressive, Doyle believes that the club legend is building towards managing the Reds in the future.

He said: “I tweeted something just after the Old Firm derby saying that I think that Steven Gerrard has his eyes on the Liverpool job, that’s all he wants.”

“The one thing I have noticed about Rangers is they play very similar to the style that Liverpool play under Jurgen Klopp – they’ve got Tavernier on the right, Barisic on the left; those two players are playing very high up the pitch in a very similar way to Trent Alexander-Arnold and Andy Robertson.”

“That would lead me to paint that Steven Gerrard is building slowly towards getting that job when Klopp leaves. Klopp is going to be gone, summer 2024. He’s said he’s got to leave after that.”

Klopp’s current deal at Liverpool runs out in the summer of 2024 and the German signed a new deal at Anfield in December 2019. This might suggest that the club’s board may have long-terms plans involving him and they are willing to stick to him in the long-term.

As far as Gerrard is concerned, he is yet to win a single trophy as a Rangers manager and while Rangers might be doing pretty well this season, it might be pretty early to see the Englishman as a future Liverpool manager.