Murphy appeared as a guest on the latest episode of the OTB Football podcast and the panel talked about multiple issues involving some transfers in European football. One player that they talked about was Danny Ings and the speculation surrounding his future at Southampton. Murphy believes that even though Ings might suit Liverpool’s policy, that ship might have sailed. 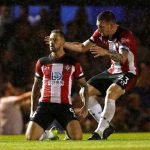 John Aldridge has previously compared Ings to Ian Rush and said: “Liverpool’s goalscorer [Ings] played like a 1980s throwback, running, chasing, harrying and closing down Norwich defenders throughout. He reminded me of Rushie and myself in the 1980s, refusing to give defenders a minute’s peace.”

The Telegraph recently reported about Ings’ situation, saying that the Englishman wants to play for a Champions League club. Money hasn’t been an issue for him in his potential new Southampton contract, but the problem revolves around a release clause. The club and Ings’ representatives have a difference in valuation for how much the release clause should be at. Ings’ preferred destination is Manchester United.

Murphy discussed whether Ings should return to Anfield in the future or not. He said: “That’s probably past it, at this stage. But again, he is a goalscorer. He would have a point to prove. They’re looking for a certain type of player, I’d expect – like Jota, with that energy, with that ‘mentality monster’ attitude.”

Ings is Southampton’s highest scorer this season and has found the net seven times in the campaign. He also has three assists to his name. He has also attempted the fourth-highest number of presses per game for the Saints this season out of players who’ve played over 1000 minutes in the campaign (as per FBRef).

Jurgen Klopp’s approach also involves high-pressing and because of his pressing numbers, Ings suits that approach. But having said that, the Athletic have stated that Liverpool have already moved on from the Englishman. So even though Ings may suit Liverpool tactically, it doesn’t seem as if the move can happen.