Salah’s Liverpool contract has currently got just over two years remaining on it and some speculation has arisen over the Egyptian attacker’s future of late after he refused to rule out a potential departure from the Merseyside club in favour of a move to either Real Madrid or Barcelona.

Speaking exclusively to Give Me Sport, Romano addressed the extent of those two La Liga clubs’ interest in the £108m-rated Liverpool man and how negotiations are moving behind the scenes between Salah’s agent and the Reds.

He explained that Barcelona’s and Real Madrid’s current level of interest in Salah does not extend to any sort of advanced negotiations between those clubs and the player’s agent or Liverpool.

However, he did also suggest that the 28-year-old may want to swap the Premier League for a different league at some point, while he went on to share that although Issa is “negotiating with the club to understand what’s going on” with regard to their intent to hand Salah a new deal, they aren’t in advanced negotiations over a new contract at present, with those talks likely to take place at some point within the next year.

The journalist said: “In this moment, interest? For sure, because, obviously, we’re talking about a fantastic player so it’s impossible for any club not to be interested in him but at the moment, there is nothing advanced with this agent or with Liverpool.

“Liverpool have not received anything from these clubs, so they were a bit surprised but they know that what Salah said is ‘one day I would like to play in these clubs’ [and this] is normal because we’re talking about two major clubs – Real Madrid and Barcelona.

“Also, to change leagues, he was amazing here in Italy, in Serie A with Roma. He has been a legend in Liverpool and he wants, probably, in the future, to try something like other leagues, we will see but at the moment, Liverpool have not received anything.

“His agent is negotiating with the club to understand what’s going on for the [new] contract. They are not negotiating right now but, for sure, the concept of Salah will be something they talk about, like in the next year. So, we will see, but, for sure, at the moment, Liverpool are really calm about the situation of Salah, they are happy with him and they are concentrating more on other players like Fabinho, Van Dijk, extending their contracts and then we will see what’s going on with Salah.

“I always mention with these kinds of players, if you want to sign these players and, with you, I mention clubs, as you say, like Real Madrid, these kinds of clubs, you have to spend – I don’t know because I’m not the owner of Liverpool – but €150 million and it is not so easy in this moment because, as we always say, bigger clubs are having enormous problems because of the stadiums, merchandising, they’re losing a lot of money, so it’s not easy.” 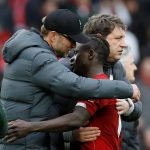 TIF Thoughts on what Romano had to say about Salah…

Judging by what Romano said, it appears that the reason why Liverpool are so calm about this situation is that the impact of the pandemic on football clubs’ finances has convinced them that it will be very difficult for potential buyers to afford Salah right now and with over two years remaining on his current deal, it seems like they feel that there’s no rush to tie him down for the long-term.

However, with Salah having indicated that he may be open to a departure from Anfield and Romano not ruling out that possibility either, it will be interesting to see if the player becomes more restless over the coming months, with his agent seemingly trying to get an idea of what Liverpool’s plans are.

Click here to see the full 30-minute video of Fabrizio Romano’s interview with Give Me Sport.