Everton: David Prentice discusses potential for Anthony Gordon to go out on loan

The Liverpool Echo’s head of sport David Prentice has recently discussed the claims that Everton youngster Anthony Gordon may leave the club on loan.

According to a recent report by the Liverpool Echo, the Toffees had no intention of loaning the Englishman out, however, that stance may have changed.

It is claimed that if the Merseyside outfit is unable to offload Bernard before the transfer deadline on Monday, Gordon may be allowed out on loan.

Supposedly, there are a host of Championship clubs as well as several in the Bundesliga that would be interested in taking Everton’s 20-year-old attacker on a temporary basis.

During the latest episode of the Liverpool Echo’s Royal Blue: The Everton FC Podcast, Prentice discussed the potential for Gordon to leave on loan.

He said: “Happy is probably not the right word to use, but I can understand the rationale. [I’m] disappointed he’s not had more game time because what we have seen from him has been bright.

“Anthony Gordon has had game time and has looked bright, so I kind of hoped that you would have seen a little bit more.

“[I’m] a bit surprised it’s either him or Bernard, I would have liked to have thought that Carlo would make a decision one way or the other and stick with one until the end of the season.”

TIF Thoughts on what David Prentice said about Anthony Gordon…

As can be seen in what the journalist had to say, he would prefer to see the forward get minutes at Goodison Park, however, it would be a worthwhile move if he gets more game time.

The journalist did note his surprise that the decision was between Gordon and Bernard, though.

Who would you rather left the club before Monday's deadline? 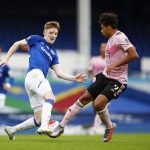 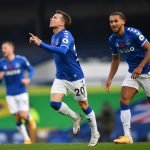 So far this season, neither player has really made much of an impact for Everton in the Premier League, however, it would seem that Bernard is the better option at the moment.

Over six league appearances, the Brazilian has earned a 6.57/10 average rating, whereas Gordon has made three appearances and earned a weaker 6.29/10 (per WhoScored).

So, for the time being, it would seem that loaning Gordon out and keeping Bernard would be the better option.