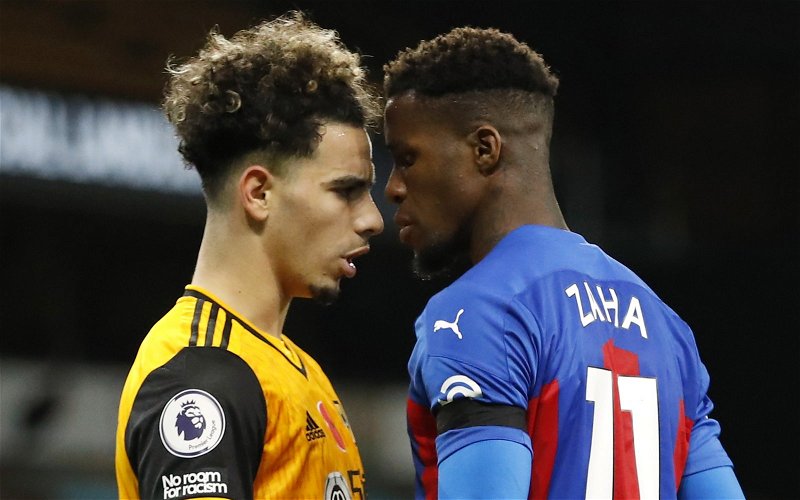 Journalist Daniel Storey has claimed a “quiet word” will be had with Crystal Palace’s Wilfried Zaha over his recent lashes out.

Over the festive period, the Eagles have played four fixtures in the Premier League (per Transfermarkt).

Those games were the 7-0 defeat against Liverpool, the 3-0 loss to Aston Villa, the 1-1 draw with Leicester City and the 2-0 victory against Sheffield United.

In all four of the clashes, Zaha has been ‘riding his luck a little’ with actions of ‘petulance’ towards opposition players (per football.london).

Across the four games, he has clashed with Trent Alexander-Arnold, Tyrone Mings, James Justin and Jayden Bogle.

During the latest episode of The Totally Football Show, Storey aired his thoughts on the recent actions from the Ivorian forward. (37:30)

He said: “Someone will have a quiet word but, to be honest, I don’t think Roy Hodgson will mind too much.

“I think Zaha’s one of those players that produces his best either when he feels angry or aggrieved with something or when he feels fully motivated to do it.

“He tweeted something after the game that he later deleted, didn’t he? About, ‘You can have a go at me but I’m the one doing it,’ that sort of thing.

“He does seem to have got a bit of edge to him and I think that’s a positive thing unless it ends up in him raising his hands and actually getting sent off for it.”

TIF Thoughts on what Daniel Storey said about Wilfried Zaha…

As can be seen in what the journalist had to say, he believes that while a “quiet word” will be had with Zaha, he thinks that it could be a “positive thing” for Palace.

Does Wilfried Zaha need to cut out his acts of 'petulance'?

No, it is a positive

Yes, it's a negative

The £45m-rated 28-year-old has seen red on four separate occasions during his 377 appearances for Crystal Palace – one for a second yellow and three for straight reds (per Transfermarkt).

So, hopefully, the attacker can rein in his acts of ‘petulance‘ before he begins adding to his tally of red cards for the Eagles.