Arsenal have been urged to sign Julian Brandt this window in order to solve one of their biggest flaws.

It’s well known that Arsenal have been struggling so far this season when it comes to creating chances, with the club currently ranked 14th in the table when it comes to chances created per 90 minutes. This has led to some calls for the Gunners to bring in a new #10 player, similar to Mesut Ozil who can do that job for them.

However, Tifo Football’s Sensible Transfers (1:46) have gone beyond that, suggesting that the club need to bring in someone who can be a lot more versatile than that, predominantly due to the ever-changing nature of Mikel Arteta’s set up at The Emirates. With that in mind, they have suggested Borussia Dortmund’s Brandt be the one that takes on that role:

“The sort of player who can do things that get you off your seat, but also does unflashy things consistently well, driving forwards with the ball at his feet, he can pick intelligent passes at speed, because his technique is excellent. And he’s also a solid presser… So while he is genuinely a box office attacker at times, Brandt seems to have the work ethic and tactical discipline to be more than just a luxury player. He could therefore help solve Arsenal’s key issues creatively but without being a defensive passenger.”

Should Arsenal make a move for Brandt? 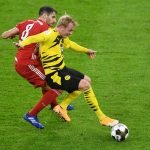 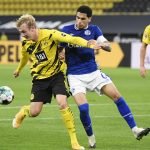 Whilst predominantly a left-winger, Brandt has shown an ability to play multiple positions throughout his career, both centrally and out wide, which does make him the perfect man for the Gunners to bring in.

Until Mikel Arteta figures out what the best system is for him to deploy and push his side up the table, there are likely to be a lot of tweaks and you don’t want to tie Brandt down to just the one spot whilst you figure that out.

Although with Pierre-Emerick Aubameyang predominantly playing out in his favoured left-wing spot, that’s one option that is probably one option that is quite possibly going to be off the table at this stage if they were to make a move.

However, it appears as if Arsenal’s hopes of signing the attacker have diminished.