Charles Watts believes that the form of Emile Smith Rowe could have had a major impact on the Gunners’ transfer window plans.

The 20-year-old has certainly been made an impact so far this season, contributing with one goal and four assists in all competitions, and has slowly made his way into becoming a regular under Mikel Arteta having started the last three games in the Premier League. And with those appearances he’s become more and more comfortable, as the increase in his WhoScored.com rating in the last three games shows.

And speaking on the latest edition of his show, Watts believes that his recent form could be forcing Arsenal to change their plans when it comes to signing a creative player in the January transfer window:

“I think the form of Emile Smith Rowe might change their plans as well. He’s done so well, since he came in that if they were thinking in January, ‘we have to get some sort of playmaker because we haven’t got one in the team.’ Well, Smith Rowe’s proved that that isn’t the case.”

Can Smith-Rowe go on to establish himself as a regular at Arsenal this season? 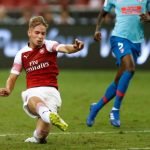 It’s a position that has certainly caused a bit of debate in the Arsenal universe, with some believing that the club need to bring Mesut Ozil into the frame. Of course, another possible solution would be to buy someone, which is what they could do based on their pursuit of Norwich City’s Emiliano Buendía.

Given where Arsenal are now, and the pressure that Mikel Arteta has been under recently, even if it has been slightly lessened after recent results, to put the faith in essentially replacing Ozil and carrying the workload on a 20-year-old would be an awfully bold move for Arteta to make. Not to say that it’s not impossible to do, we could be seeing another Marcus Rashford on our hands for instance.