Supporters of Leeds United have recently reacted to a transfer link which has emerged between the Whites and RC Lens centre-back Loic Bade.

According to a recent report from FootMercato, Marcelo Bielsa’s side is eyeing a swoop for the 20-year-old Frenchman.

However, it is claimed that the Yorkshire outfit is not alone in its interest in signing the defender as other clubs across Europe are lining up for him.

This claim was picked up by the Yorkshire Evening Post, which shared the story in a report containing a number of other transfer rumours.

The post was then shared on the Leeds United – YEP Facebook page, which asked fans if the defence was the most important area for the Whites to recruit in during January.

So, what did these Leeds fans have to say following the transfer link between the Whites and Loic Bade? 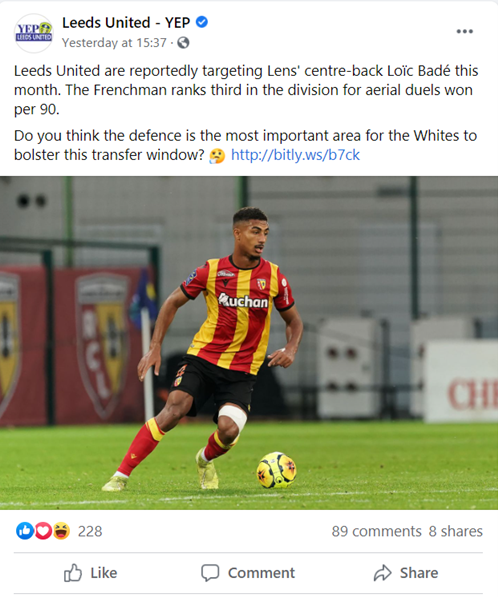 The young Frenchman has until the summer of 2023 on his existing deal with Lens and a current market value of £5.4m according to Transfermarkt.

Do you think Loic Bade would be a good signing for Leeds?

Yes, he seems a talent

So far this season, Bade has made 16 Ligue 1 appearances for his club in which he has managed to make 2.2 tackles and 2.8 interceptions per game on average (per WhoScored).

These figures have made him the joint-second-best tackler and comfortably the best interceptor of the ball for his French outfit.

His performances have been solid overall, too, as he has earned a 7.02/10 average rating, making him the third-best performer to feature in the league for Lens this season.

As can be seen in these responses from Leeds fans, many of them seemed to be in agreement that the defence is in need of reinforcements.