Fans of Leeds United have been reacting to a post on Facebook, which relayed a report regarding a potential move from the Whites’ for out of contract centre-forward, Diego Costa.

Speaking to Football Insider, Kevin Phillips claimed that Costa had been “linked” with a move to Leeds, and that, if the club could “pull that off” it would be a “masterstroke”.

He continued: “It is an area – if I am Marcelo Bielsa – that I am desperately trying to bring someone in. They need an out-and-out striker who can provide competition for [Patrick] Bamford.”

After returning to Atletico Madrid from Chelsea in what was a £54 million deal back in January of 2018, the £9 million-rated 32-year-old went on to feature 81 times for Diego Simeone’s side, scoring 19 goals and providing 14 assists, before leaving the club by mutual consent back in December.

And, after Leeds United Live shared a report containing Phillips’ claim regarding Costa on their Facebook page, fans of the club flocked to have their say on the matter, with many appearing rather less convinced than the former Premier League striker that a move for Costa would be good for their club.

Would Costa be a good signing for Leeds?

So, what exactly did these Leeds United fans have to say in reaction to the link with Diego Costa? 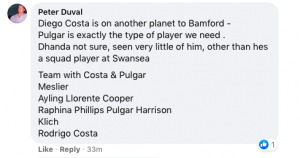 All in all, it would appear that the majority of these Leeds fans do not agree with Phillips’ claim that the signing of Costa would be a masterstroke by their club, with many claiming that the 32-year-old’s reported weekly wage of £265,000 while at Atletico would price the Whites out of a move, while others stated that they do not believe the Spain international possesses the level of fitness that Bielsa requires of his players.

However, others did seem to think that a move for the striker would be a good one, with some stating that Costa is in a completely different league to the club’s current centre-forward, Bamford.