Many Celtic fans have been reacting to a Facebook post that was recently made by the Celtic News Now Facebook page which relayed ex-Hoops player Scott McDonald’s claim that the Glasgow club has ‘a plan in place’ for the future of current assistant manager John Kennedy.

McDonald appeared on a recent edition of The Celtic Huddle podcast and after sharing that he doesn’t think Kennedy would depart from Parkhead with Neil Lennon if the Northern Irishman is sacked by the Glasgow club, he went on to share some optimism about the 37-year-old former centre-back’s Celtic future.

He said: “There’s a plan in place for John. He’s worked under several managers and I think he’s more or less part of the furniture now and the club believe in John, that’s evident, and that’s why he’s been put in the role, the position that he is in now.

“Now, if you’re asking me if he’s going to be the next Celtic manager, I don’t believe so at this moment in time – I do believe, though, if everything went well this year, I still probably see Neil leaving after ten.”

After McDonald’s claim that the Hoops have a plan for Kennedy’s future was shared by Celtic News Now on Facebook, their post caught the attention of many Hoops supporters.

So, how did these Celtic fans react to McDonald’s comments on Kennedy? 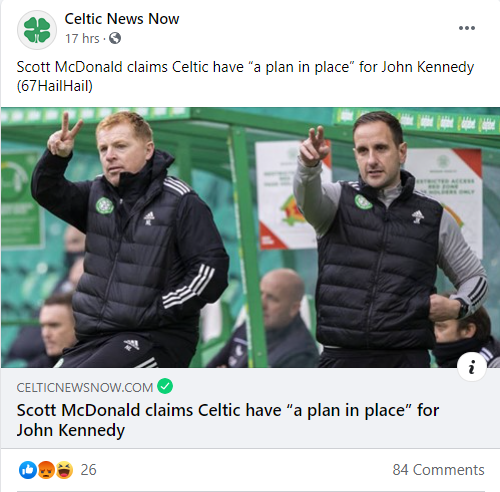 While McDonald did state that he doesn’t believe Kennedy is set to become the next Celtic manager, it certainly seems as though he thinks the 37-year-old may occupy that position one day in the future, and many of the Hoops supporters that commented on this post reacted negatively to McDonald’s claim that Celtic have ‘a plan in place’ for Kennedy, with those fans of the Glasgow club taking this opportunity to share some criticism for the coach.

Do you think Kennedy will manage Celtic one day?

While many of these Celtic fans were critical of Kennedy, one particular Hoops supporter defended the coach.

So, as can be seen from these comments on this Facebook post, while one Hoops supporter backed Kennedy, the majority of Celtic fans don’t seem to be overly thrilled with the Celtic assistant at present and don’t seem to be too keen on him having a significant role at the Glasgow club moving forward.