Many Celtic fans have been fuming at the verdict involving Steven Naismith following a flashpoint between the Hearts player and Scott Brown.

SFA have now confirmed that they will not punish Naismith despite the fact that he appeared to stamp Scott Brown in the recent Scottish Cup final. There were a number of flashpoints involving the two players and referee John Beaton hadn’t punished Naismith even once (as per the Daily Record).

Did Naismith deserve to get banned? 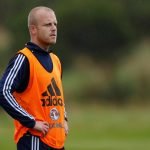 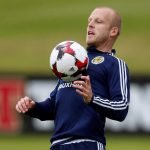 The deadline for announcing an action against Naismith passed on Tuesday, which means that the former Everton player has escaped any punishment.

An article about this was relayed on Twitter by TheCelticBlog and it caught the attention of many Celtic fans, who were fuming at the decision.

What did Celtic fans make of this update about Naismith?

But we’re all just paranoid. And the clubs silence is deafening.

No it’s not! However if Peter Lawwell put a shift in we may just one day address these incidents. Unfortunately he is manacled to the 5 way disagreement so effectively neutered.

Credit: @mcfadzean_neil
SFA not even trying to hide it anymore….
The Bhoys had beaten Hearts in the Scottish Cup final. The game had ended 3-3 after extra-time, as Leigh Griffiths had scored once during that period. In the penalty shootout, the Hoops won 4-3 and sealed an unprecedented quadruple treble (As per BBC Sport).
Some Celtic fans also made their opinion clear about the inactivity from the SFA regarding Naismith.

It was a formality. That would be the outcome.. Did you expect anything else i certainly did not.

Not really. We have a compliant PLC Board to thank for this

Recently there has been 3 occurrences of stamping on Celtic players. Moreles on Ralston Naismith on Hayes and Naismith on Brown. That’s 3 occasions where no on field action was taken followed by no action by the governing body. Contrast with Browns charge for celebrating v them

What a surprise
Credit: @pmcc1313
“Right @CelticFC get the friggin finger out..you wont protect or stand up for your own support-nothing new there. but letting the @spfl @ScottishFA let every team and player assault to try injure your own players and not punish them when the evidence shows this 100% is outrageous”
Former Premier League referee Mark Halsey has already talked about Naismith’s challenge on Brown. He said that there is an argument to say that Naismith could’ve been sent off for violent conduct in the game and he said that he’d be ‘amazed’ if no action was taken against Naismith (as per This Is Futbol).
So this clearly suggests that some action should’ve been taken against Naismith and it is understandable why Celtic fans are disappointed.