Many Celtic fans have been fuming at Charlie Nicholas after he gave some comments about Neil Lennon’s status at the club.

Nicholas recently wrote about Celtic in his latest column for the Express (via Daily Record). The former player talked about Lennon and said that the Celtic manager isn’t a ‘true great’ for the club like Jock Stein or Brendan Rodgers. Nicholas said that while there is no denying that winning the quadruple-treble is quite an achievement, the club’s triumphs have come when the division hasn’t been too competitive.

Does Nicholas have an agenda against Lennon?

The pundit compared Lennon to Martin O’Neill, because both of them inherited a lot of players from previous managers.

A tweet about these comments was relayed on Twitter by the Daily Record. Many Celtic fans were fuming at what he had to say.

What did Celtic fans make of these comments from Charlie Nicholas?

While the Hoops are currently 16 points behind the Gers in the Premiership table, they do have a total of three games in hand.

Despite that, Lennon has been very successful as the manager at Parkhead. He has now helped them win five Premiership titles and they have now won three Scottish Cups under Lennon (as per Transfermarkt).

Some other Celtic fans were also fuming at what Nicholas had to say about Lennon’s status at the club. 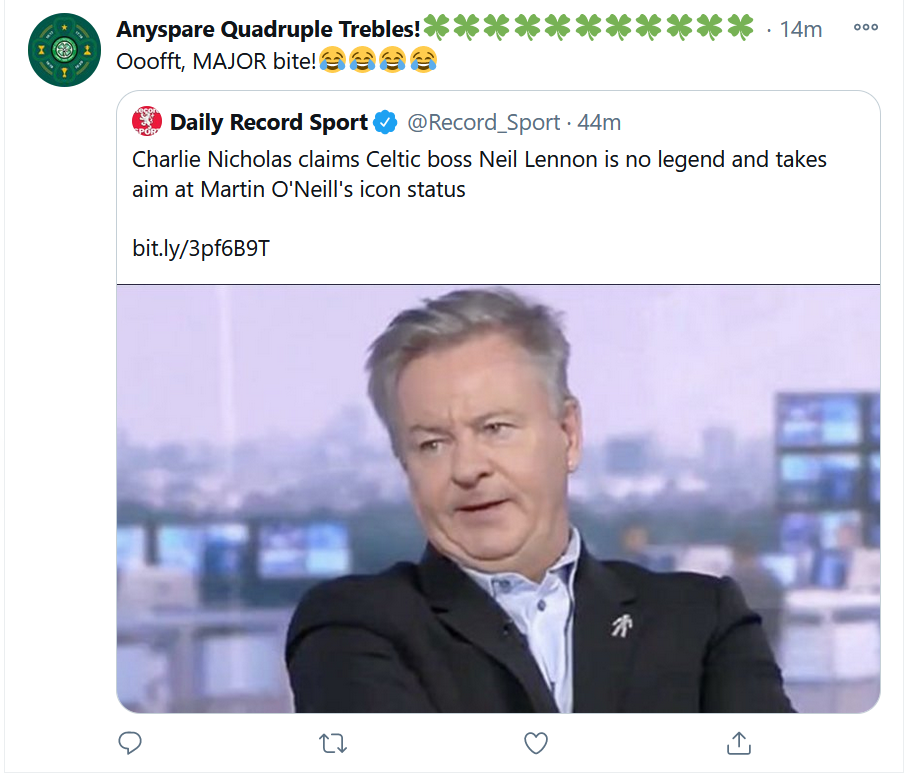 These fans clearly disagree with Nicholas and perhaps, they believe that Lennon is a club legend.

And they are right in saying so, considering that Lennon hasn’t just won titles with Celtic as a manager. Even as a player, Lennon won a total of five Premiership titles with the Hoops and won as many as four Scottish Cups too. Not just that, he also won a couple of League Cup titles as well (as per Transfermarkt).

Because of all these achievements, Lennon deserves a lot of respect and Nicholas’ criticism isn’t justified.