Supporters of Celtic have fumed after a report on the position of the club’s manager Neil Lennon recently emerged.

According to The Scottish Sun, the Northern Irishman has been given assurances by the board at Celtic Park that his job with the Hoops is ‘safe for now’.

The report comes after the Bhoys have won just two of their last 12 matches in all competitions.

It is also claimed in the report that Lennon had ‘begged‘ for more time at Parkhead to turn Celtic’s form around and save their season.

This report was relayed to Celtic fans on Facebook by the page Glasgow Celtic Champions and it had lots of supporters fuming.

So, what did these Celtic fans have to say about the report on Neil Lennon’s position with Celtic? 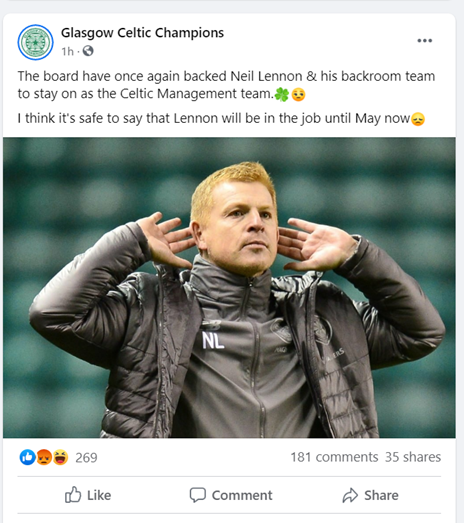 During Lennon’s current stint with the Hoops, the manager has been situated at Parkhead since February 2019, however, he previously spent four years as Celtic’s manager between 2010 and 2014.

No, it's not the answer

Yes, he is the problem 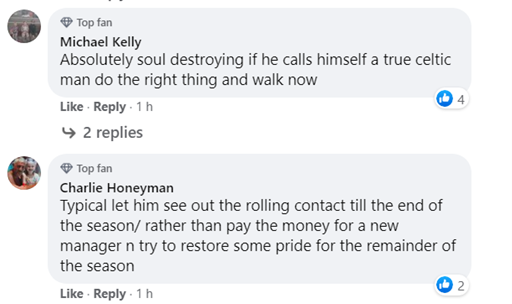 In the Scottish Premiership, the Bhoys currently sit second in the table, trailing their rivals Rangers by 13 points but with two games in hand (per BBC).

Aside from their struggles in the league, recent defeats against Ross County and Sparta Prague have knocked the Hoops out of the Scottish League Cup and ensured they could not progress in the Europa League.

As can be seen in these responses from Celtic fans, they were evidently furious with the claim that Lennon still has the Celtic hierarchy’s backing.