Many Celtic fans have been talking about the club’s links with a move to sign Bodo/Glimt striker Kasper Junker.

TeamTalk has recently reported that Celtic are currently monitoring the situation of the 26-year-old striker. Apart from them, Derby County are among the clubs keeping tabs on him, with the likes of West Brom, Crystal Palace, Swansea City, Middlesbrough and Bristol City also looking to sign the forward.

Should Celtic replace Edouard with Junker? 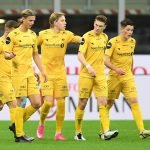 The report claims that in the new work permit laws, Junker would qualify even though he isn’t a full international player yet.

This update about Junker caught the attention of many Celtic fans, who made their opinion clear about the striker.

What did Celtic fans make of the club’s links with Junker?

Celtic will sign him and say he’s not ready. Put him in the development squad. Bench for a few games and then sent back with 10 minutes under his belt.

Must be eyeing up Eddy’s replacement

we could literally have no keepers at the club and we’d still be trying to sign strikers https://t.co/U3Qyz0Dvqq

The Danish striker was in impressive form for Bodo/Glimt in the recent league season. He scored 27 goals in just 25 games and even racked up a tally of 11 assists (as per Transfermarkt).

He joined Bodo/Glimt from Danish club AC Horsens for a fee of £540k and he recently helped his current club achieve a feat as they won the Norwegian title for the first time in their 104-year history, becoming the first Arctic team to do so (as per BBC Sport).

Some other Celtic fans also began talking about the club’s links with the striker.

Can we not face a battle from a host off English clubs and just go and get who we need, Keeper, CB LB CF please thank you Celtic.??????????

There is clearly a mixed reaction to the club’s links with Junker and some fans want the club to focus on signing a centre-back.

Having said that, Odsonne Edouard was linked with a move to the Premier League in the summer. Leigh Griffiths’ fitness issues have been a problem. Patryk Klimala hasn’t been a regular. So if Edouard departs, the Hoops might need a regular striker soon.

Considering Junker’s goalscoring record from the most recent season, he could prove to be a handy signing for the Bhoys.