Many Celtic fans have flocked to the latest tweet from Odsonne Edouard that recently emerged on social media.

Edouard recently tweeted and his tweet carried an image of himself standing with three trophies. The tweet also included two other images, which had the Frenchman scoring a penalty for the club in the recent Scottish Cup final against Hearts.

Is Edouard not performing at his best this season? 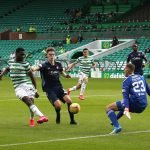 This came after the Hoops’ penalty shootout win over Hearts, as the game had ended 3-3 in extra-time. This win had helped the Bhoys win the quadruple-treble (as per BBC Sport).

Edouard’s tweet drew the attention of many Celtic fans, who began talking about it.

What did Celtic fans make of this tweet from Odsonne Edouard?

Edouard, who is valued at £13.5m, had found the back of the net with a penalty in normal time and with that, he had handed the side a 2-0 lead. Having said that, the Frenchman couldn’t take a spot-kick in the penalty shootout as the striker was substituted in the 97th minute of the tie (as per WhoScored).

Neil McCann had criticised Edouard’s penalty and he had described the panenka to be ‘disrespectful’ to former Celtic goalkeeper Craig Gordon, who was between the sticks for Hearts. The pundit also described the penalty to be ‘selfish’ (as per Edinburgh Live).

Some other Celtic fans also flocked to the tweet from the striker.

Get your head back in the game, get back to scoring goals from open play

Apart for the penalty, was shocking missing sitter after sitter. Griffiths done more in 5 minutes.

Some of these Celtic fans are pleased about Edouard’s tweet and one fan is making it clear that the Frenchman shouldn’t leave Parkhead anytime soon.

The striker has scored only five goals in the Premiership this season, but his last goal from open play in the league came in the first game of the season against Hamilton. He did score against Ross County and Hibernian, but both those goals came from the spot, too (as per Transfermarkt).

Because of that, Edouard might need to improve his performances to start delivering on a regular basis soon.