Many Celtic fans have flocked to the latest tweet that Jozo Simunovic recently relayed on social media.

The club’s former defender recently relayed a tweet on social media and it included a video of him training indoors. In the video, Simunovic was wearing Celtic shorts. The caption of the tweet read: “Stay focused, stay positive and your time will come. Nothing happens without reason.”

Were Celtic right to move on from Simunovic? 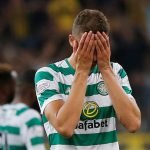 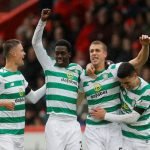 Simunovic’s tweet caught the attention of many Celtic fans, who began talking about the Croatian. Some of them made it clear that they would want him back at Parkhead.

What did Celtic fans make of Jozo Simunovic’s tweet?

Another former Celtic player who should NOT have been allowed to go. Replaced by inferior players IMO!!!!

Come back to Celtic

6 month contract on the table. Get yer bags packed ???

Could use you just now man. Defence is horrific atm

Simunovic had joined Celtic from Dinamo Zagreb in the summer of 2015 and during his time at Parkhead, he made 126 appearances in all competitions for the Bhoys, while scoring five goals and getting three assists as well (as per Transfermarkt).

The Croatian had left Celtic in the summer transfer window and he is currently without a club, as his contract at Parkhead had run out. Simunovic’s tweet caught the attention of some other Celtic fans as well.

Come back Jozo, don’t know why you were let go in the first place, we need help ?

A bombscare at times but would rather him than Duffers. Bring him home https://t.co/xeuIfI06qJ

Come home Jozo. This was biggest shock to me letting this boy go total madness.

While some of these Celtic fans would be glad to have Simunovic back, others feel that the defender shouldn’t have been allowed to leave.

Having said that, Simunovic had a pretty poor injury record at Celtic. He faced a lot of knee injuries during his time at Parkhead and in the 2019/20 campaign, he had missed as many as 28 games (as per Transfermarkt).

So because of his poor fitness record over the last few seasons, it is understandable why the Hoops decided to let him go.